Mandalay. It is one of those few names that alone evoke the charms of a lost past. Kipling immortalised it in a poem many still know by heart (On the road to Mandalay, where the flying fishes play, and the dawn comes up like thunder out of China across the bay). Sinatra sang about it on Come Fly With Me. Kay Francis starred in a gloriously ill-acted 1934 black and white movie named after it.

Mandalay has been Yonder in our imaginations for a long, long time. Once a royal city, it has a rich history. The city’s people are rightly proud of their heritage and perhaps that pride slightly colours their approach to the rest of the world.. Who can blame them!

Where to stay in Mandalay?

With so much to see and do in the royal city, your Mandalay accommodation should be the last thing on your mind. Even veteran travellers are faced with the dilemma of which Mandalay hotel to choose. Fortunately, for Yonderers, we’ve done all of the leg work and have produced a fine list of Mandalay hotels. There’s a healthy dose of variety within our hand-picked hotel selection from small and quaint to modern high-rise to boutique hotels in Mandalay. All are superb with their own quirks and charms.

The centre of Mandalay was home to the royal palace; a magnificent cluster of teak buildings surrounded by an enormous wall and moat.  Sadly, all that is left today is the wall and the moat, although there is a modern concrete reconstruction of the old wooden palace buildings.

But aside from its royal connections, Mandalay has an intensity to it like nowhere else. This is a young Asian city that it just starting to take off. It’s bustling with energy, cosmopolitan restaurants and, predictably, a fair few tourist traps.

It’s also home to the world’s biggest book (not really a book in the modern sense but rather a collection of stone tablets), Shwe in Bin Kyaung Monastery which is a beautifully preserved, richly carved teak building created in 1895 by a pair of wealthy Chinese jade merchants and the Sutaungpyei, the stunning ‘wish-fulfilling’ pagoda on the top of iconic Mandalay Hill (also the best spot for a panoramic view of the city, the walls and moat of the old palace).

But, make no mistake, Mandalay isn’t just some sterile tourist magnet. Like all Burmese cities, it is living, breathing, working community, and rendered endlessly enchanting for that reason.

The gold pounding district is fascinating and you’ll find a traditional workshops producing sheets of gold leaf that are used at offerings by countless pilgrims to adorn statues of the lord Buddha. To the west of the city lies the the former British hill station of Py Oo Lwin and Amarapura which boasts the world’s longest teak bridge, U Bein.

A journey through the grid-like streets in a rickshaw – yes they still really do ply their trade – is a must. Known locally as the ‘kings of the road’, the rickshaw men are amongst the most humble and genuine people we have come across. Even if you just grab a one-way ride to a bar or restaurant in the evening, it is one of those precious experiences that linger in the mind, especially given the knowledge that this is a rapidly disappearing form of transport.

Mandalay is an exciting place to be, with lots of things to see and do. We have a particular fondness for visiting the local market which is spread over the train tracks. There are traders and merchants selling everything from fresh veg to live poultry. Once every morning, a huge train comes rumbling through. An advanced warning is given and the traders will scurry around to gather they produce and move it off the tracks. For those who are too slow, the only option is to flatten it out between the tracks. The crowds suddenly part and the train comes thundering though. Once it disappears, traders set up shop again and the market continues. It really is a remarkable experience and will leave you with a story to tell over and over again.

A short drive, or cycle if you value some fresh air, outside Mandalay is the small town of Amarapura. There is a huge monastery, much of it modern, which is home to over 3,000 monks  from the age of six to 90. Depending on timings, and on request, it is possible to have an audience with one of the senior monks for a fascinating discussion about life in the monastery and the virtuous path they have chosen. Just a short distance away is U Bein bridge, constructed entirely of teak. In fact, at 1.2 kilometres long, it is the longest teak bridge in the world.

Mandalay comes second only to Yangon in its array of places to go to chow. Pretty much anything can be found but the question of quality is perennial. Opt for Burmese or Thai and you’ll be guaranteed excellent food with authentic flavours. Move further towards Indian or Vietnamese and you’ll get an idiosyncratic take on classic dishes but delicious nonetheless. Stray too far afield, and the restaurant scene can become less predictable. That said, we’ve eaten some great pastas and even had an unusual but nevertheless delicious Mexican meal.

There are a couple of bars that could be recommended but they are very Burmese in style and you’ll find them mainly frequented by wealthy locals. Almost all restaurants have a good selection of alcoholic and non-alcoholic drinks. One of our favourites is a cocktail made with Mandalay rum and fresh lime juice. It’s pretty sharp but extremely moreish. 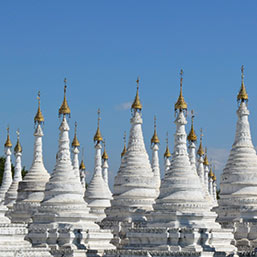 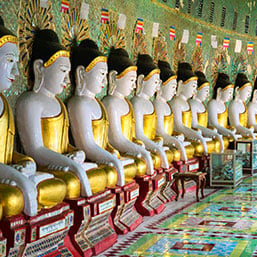 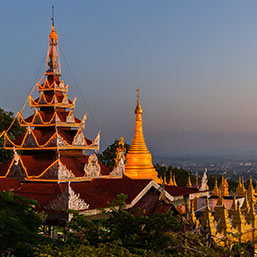 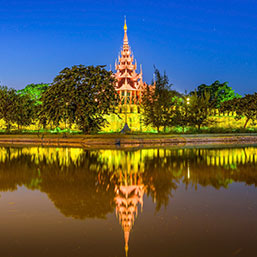 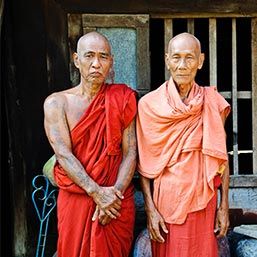 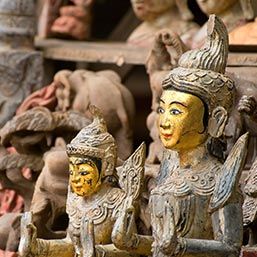 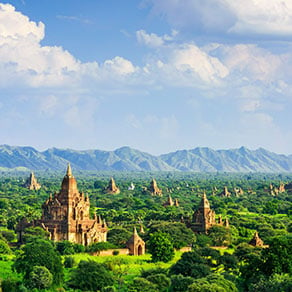 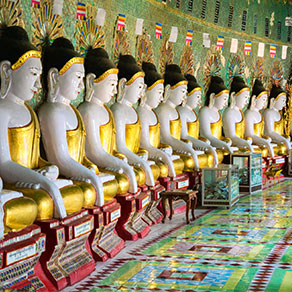 The Red Canal in Mandalay conjures visions of a waterway threading its crimson hue through this fabled city. In reality, the Red Canal is unremarkable. But the same cannot be said of the little hotel that borrows its name, which is extremely charming and friendly.

If you only do three things in Mandalay…

Visit the morning market on the outskirts of town which run over a train track. Guess what happens when the train comes…

March up (or drive depending on your energy levels) Mandalay Hill. Its got a stunning temple on top, amazing views and is rich with history including being the last pocket of the Japanese occupiers during World War Two.

A rickshaw has to be the ultimate symbol of Mandalay. We love them and the conversations with the “Kings” are amongst the best insights we’ve had into life in Burma.