Jodhpur, capital of the kingdom of Marwar, encapsulates everything that is so brilliant about Rajasthan. The beautifully preserved Mehrangarh Fort, built in 1460, is a magnificent sight and an architectural triumph. Surrounding it is a bite-sized old city enclosed by massive walls with squares and step wells all waiting to be discovered on foot.  And yet, amazingly, despite the delights of Jodhpur and its luxury hotels, it is regularly overlooked by mainstream travellers.

Surrounding it is a bite-sized old city surrounded by massive walls with squares and step wells all waiting to be discovered on foot. And yet, amazingly, despite the delights of Jodhpur and its luxury hotels, it is regularly overlooked by mainstream travellers.

It is often referred to as the Blue City as many of the houses in the old quarter are vividly painted in this colour. There are varying theories about the origins of the colour, from the designation of high castes to a chemical within the pigment used as a deterrent for termites … to a more obvious, practical way of cooling buildings down from the scorching sun.

And it is for this latter reason that Jodhpur is also called the Sun City. Perched on the edge of the Thar desert, Jodhpur has a dry, hot climate which makes it the perfect place to come if you crave some rays although it can get exceptionally hot. Get the sun cream out or you’ll burn – you have it on good authority!

Unusually for a large Indian city, Jodhpur is a very clean and orderly. Much of this is down to the Maharaja of Jodhpur who, although having no official role in the running of the city, promotes the notion of social responsibility.

And at Mehrangarh Fort, which is still within his family ownership, he runs a very tight ship with no hawkers, beggars or litter. Furthermore, the Mehrangarh, which is one of the largest hilltop forts in India, is spectacularly well maintained and the museum brilliantly curated. So much so,  we think is the very best we’ve seen.

A stone’s from Mehrangarh, perched on an opposite hilltop, is Jaswant Thada, a beautiful mausoleum constructed at the turn of the last century using the finest materials from the surrounding areas. The facades are from thin sheets of marble which glow when illuminated by the sun and the windows are stunning, with views to die for (if you will excuse the gruesome pun). There are more marble steps than you could count, tiered gardens and an area still used as the royal burial ground.

And Needless to say, never stinting from the call of duty, Yonder has extensively researched Jodhpur luxury hotels and boutique hotels in order to bring you our select few….

Jodhpur is one of those rare gems that can easily be navigated using just your legs. The main square is alive with tradesmen selling their wares. Much of this is aimed at locals, although a recent boom in the cottage industry has produced fabulous goods that appeal to discerning visitors, such as textiles adorned using traditional methods of block printing, pottery and hammered metals. The clock tower, built around the turn of the last century, dominates  the centre of the square.

The countryside surrounding Jodhpur is home to the Bishnoi people. They are a very small and  unique sect whose religious origins come from Hinduism. A fascinating few hours can be spent learning about their way of life, including their belief that no harm can come to living things which prevents them from killing animals and even felling trees for firewood. The same areas are also home to scrub lands which provide habits for a large range of birds and mammals, including leopards,  which can occasionally be seen when out and about.

One of the beauties of an old city which is comfortably walkable is the fact you don’t have to go far to find a good restaurant. Furthermore, many of the old houses of Jodhpur have flat roofs which make the ideal spot for a starlit dining platform. As Mehrangarh Fort is at the top of a sheer cliff, it is viewable from most of the rooftop restaurants. And if you want something at street level, the food on the stalls is lip-smackingly moreish.

Jodhpur is home to some fabulous restaurants and a number of famous Indian dishes have Jodhpuri origins. We are thinking of a Laal Maas, a spicy lamb curry, washed down with a Makhaniya Lassi, a buttermilk drink flavoured with cardamom and saffron. Mmmm memories! Or if just a nibble is needed to keep hunger at bay, a Mirchi Bada, a deep-fried chilli and potato snack served with tamarind chutney is mouthwatering. 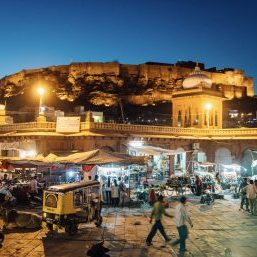 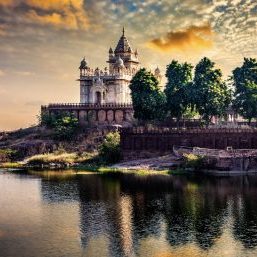 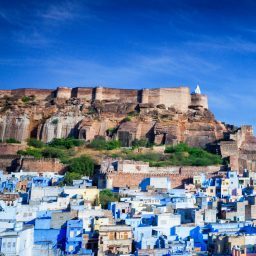 There are no other hotels in Jaisalmer quite like the Killa Bhawan. It is the place to stay with its unique location within the ancient fortress. A delightful boutique guest house full of character, it is simple, unpretentious and utterly charming.

The live-in residence of the Maharaja of Jodhpur, Umaid Bhawan is an Art Deco masterpiece only marginally smaller than Buckingham Palace. You’ll be treated like a member of the Maharaja’s family. Sumptuous rooms with views over manicured gardens and courtyards.

Hip Maharaja living at its best, with incredible view towards Mehrangarh Fort. An 18m infinity pool lined with muslin-draped cabanas. The ILA spa is a fast track to heaven, while the cuisine is brilliant. Luxury rooms are perfectly formed envelopes of bliss.

If you only do three things in Jodhpur…

Explore the old city on foot. It’s compact, the people are friendly and you don’t need a guide. You’ll notice within a couple of streets how different trades are plied each within its own small area.

If you get peckish, head to the samosa shop, just outside the main city gate which is famous across Rajasthan for its freshly prepared little parcels of heaven.

Ensure you have enough time to really absorb the brilliant museum and rooms at Mehrangarh Fort. You won’t be disappointed.

So much to explore in Jodhpur

Where to go in Jodhpur