Goa is incredible India in miniature. Not just because it is the country’s smallest state but also because it spent almost half a millennium ruled by the Portuguese, resulting in a spectacular fusion of Western influences and local traditions. It is here that you find kaleidoscopic culture, architecture and food combining to produce a rich, sensual experience. Add to this a sensational string of stunning beaches, and you have a perfectly formed paradise for pleasure seeking Yonderers. All the more inviting, after a fascinating but perhaps a little frenetic tour elsewhere in India.

Goa has come a long way since the heady hippy days of the 1960s.  We’ve done our homework in Goa to discover countless coves, beautiful beaches and unsullied seascapes away from the scourge of mass market tourism. The north has been heavily developed and is generally busier, whilst the south still retains its sleepy charm and laid-back vibes. No wonder then that we generally spend our time in the south in keeping with our affinity with the fabled Goan concept of ‘susegad’, which literally translates as ‘a contented form of life existent in the state’.

That said, Panjim or old Goa is a mesmerising place, overflowing with Latin character, from its baroque architecture and whitewashed churches to dilapidated forts and soaring cathedrals. But it isn’t just bricks and mortar that provide a constant reminder of the European settlers. The Indo-Portuguese food in Goa, with its spices, smells and sensations, is like no other cuisine in India or in the world at large, for that matter.

When it comes to luxury hotels in Goa, our top tip is to head south. The more popular beaches of Candolim and Calangute in the north are densely packed with large impersonal resort style hotels, whilst the south generally has a feeling of space and tranquility, while, most importantly, remaining true to the Goan susegad philosophy.

Most Yonderers come to Goa to kick back and relax at the end of a gloriously fulfilling but action-packed tour of India. Getting back on the sightseeing trail may not top everyone’s priority list but Goa has a lot to offer other than sand, sea, sun and spirituality. It would be remiss not to visit the UNESCO world heritage site of Panjim for a few hours to soak up the atmosphere. Grand colonial era buildings stand shoulder to shoulder with contemporary shopping malls and the maze of alleyways in the Latin Quarter are the impressive cultural legacy  left behind by the Portuguese.

The fact that Goa remained an important outpost of the Europeans for nearly 500 years is testament to its rich bounty of spice and fragrances. Today, Goa’s interior is just as rich as it was then, with verdant paddy fields and plentiful spice plantations producing vanilla, nutmeg, chili and pepper. It’s also blessed with hidden churches, roaring rivers and beautiful landscapes.

Goa is a foodie’s heaven. Could there be anything more enticing than the promise of fragrant spices, fresh seafood and a sensational blend of Indo-Portuguese cuisine? Goan specialities include xacuti (spicy chicken cooked in a rich red coconut broth) and vindalho (a fiery sauce made from garlic and vinegar), along with the traditional staple, usually eaten at lunch, of Goan fish curry and rice. The beach shacks are some of the best places to eat local fare, with many focusing on seafood and vegetarian dishes. Owing to Goa’s international popularity, there are plenty of restaurants that serve international cuisine, although the reliability of Western food outside our suggested hotels can be hit and miss. 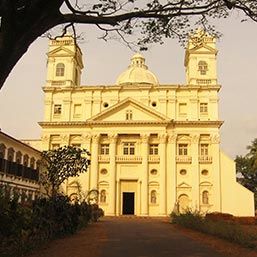 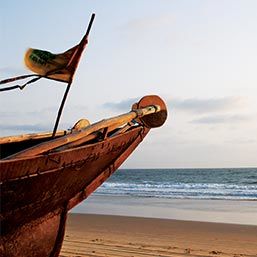 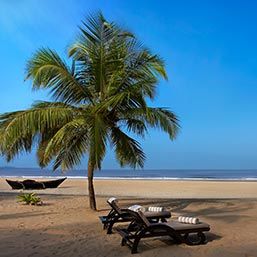 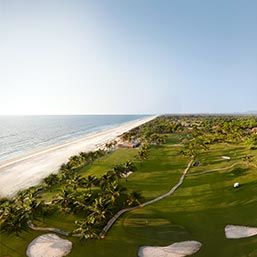 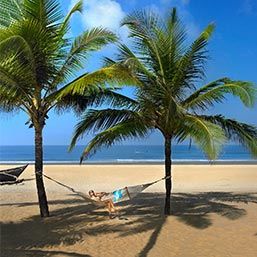 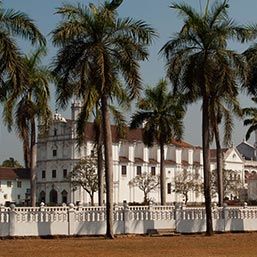 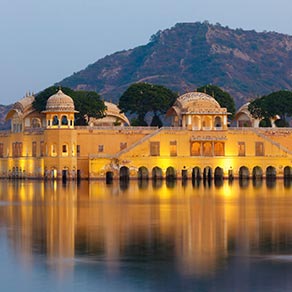 The Taj Exotica in southern Goa is the kind of hotel that will slow your heart beat to a tranquil tempo. Nestled into 56 acres of manicured gardens, with 800 meters of uninterrupted sandy beach facing the Arabian Sea and more facilities than we can recount here.

Sandwiched between a turquoise lagoon and the azure ocean, The Leela Goa is a slice of paradise that very few hotels can match. Add in Leela’s trademark service, beautiful rooms and a private golf course, and you’ll quickly grasp that this is somewhere very special indeed.

If you only do three things in Goa…

After a sensational tour of northern India, we luxuriated by a deserted beach for a few days to catch up on some R&R. Malik, our ever attentive butler, plied us with a little known Indian Rosé as we lazed by our private pool.

After a sensational tour of northern India, we luxuriated by a deserted beach for a few days to catch up on some R&R. Malik, our ever attentive butler, plied us with a little known Indian Rosé as we lazed by our private pool.