The Taj Mahal. It dominates everything that is ever said about a holiday in Agra. And as one of the Seven Modern Wonders of the World, its reputation speaks for itself. But whilst the Taj Mahal is unquestionably magnificent, the greater Agra area is also home to two other gems: The Agra Fort and the ancient ruins of the sandstone city of Fatehpur Sikri.

The symmetrical marble colossus that is the Taj Mahal was completed in 1653 and was described by Nobel laureate Rabindranath Tagore as ‘the teardrop on the cheek of time’. The Taj Mahal gets to you that way. It’s the ultimate symbol of love and devotion. No wonder, the red tops went crazy when the late Princess Diana visited without Charles.

Built by Mughal Emperor Shah Jahan as a mausoleum in memory of his wife Mumtaz, the symmetrical building is is perfectly laid out with trees, fountains and reflection pools running north to south.

Everything about the Taj Mahal is impressive. The size, the geometry, the fine craftsmanship of the artisans, the semi-precious stones intricately inlaid into marble and the beautiful Persian inspired gardens. And flanking the building are 40m minarets designed simply to accentuate the grandeur of the building and to dominate the view up towards the sky.

The holy Yamuna river, which provides Agra with fertile alluvial soil, has two great monuments on its banks, The Taj and the Agra Fort. The latter is slightly older, dating from 1558 and served as the centre of the capital of the Mughal empire. It’s a massive 94-acre site, probably better described as a walled city, of which just a small section is open to the public, the rest occupied by the Indian Army. That part which is open is a spectacular blend of white marble and red sandstone buildings, halls and walkways, interspersed by lush green gardens.

And there is another tempting highlight to a holiday in Agra. Fatehpur Sikri, dating from a similar period and founded by the Mughal Emperor Akbar, is today an extraordinary ruined city with all the hallmarks of an Indiana Jones classic. The main site is beautiful tapestry of rich, red sandstone palaces, halls and squares drawing influences from Islam, Hinduism and Jainism. The architectural detailing, from gravity-driven fountains to cantilevered balconies all adorned with exquisite carvings, is mind-boggling. There is a colossal majesty to it.

Given it’s prominence on the tourist trail, there are remarkably slim pickings for luxury hotels in Agra. Other than our favourite Agra hotel, the Oberoi Amarvilas, the other hotels in Agra are all somewhat conformist and nondescript. That is not to say that the service isn’t excellent, the cuisine isn’t delicious or that the bedrooms aren’t superb –  rather that they don’t have that quirky individuality that we seek out. But then, as we have said elsewhere, the city is so truly amazing for its sites, you probably won’t be surprised that most hotels in Agra play second fiddle.

One of the most exciting ways to get to Agra is by train. It’s only a couple of hours from Delhi on the express train and the first class compartment is more than adequate. Along the way you’ll pass through rural countryside, provincial towns and the occasional slum.  And you’ll experience the railway system that keeps Indians moving, all 23 million of them that use the rail system daily.

Agra is a thriving and unfortunately rather dirty city, thanks in large part to its star attractions which have seen a continuous boom in tourists over recent years. Other than the Taj Mahal and Agra Fort there are a number of interesting places to visit. The Taj Mahal museum, within the Taj complex, is often overlooked but it’s well curated and gives fascinating insights.

Agra city itself is bustling and whilst the frenetic energy, especially in the bazaars, can be exciting, the ranks of hawkers and rickshaw-wallas can be a nuisance beyond belief.

In the centre of town, the area generally known as the Kinari Bazaar is an amazing place to visit. A maze of narrow lanes, thronging with traders, people, cows and even the occasional elephant in a modern incarnation of old world India. The Jama Masjid mosque, once connected to the Fort, is within this area and is a spectacular landmark with beautiful domes.

Agra is awash with small restaurants and tea houses which serve up tantalisingly good masala chai and simple but fantastic North Indian dishes which are richly spiced and often deliciously sweetened with prunes and dates. Locals will flit in and out using these eating places as a place to gather.

But a prerequisite of eating in these local establishments is often a strong constitution. For those who prefer more comfortable seating and peace of mind, there are a number of good restaurants in town. However, as always when dining in India the best food, and certainly the most reliable, is found within the top hotels. 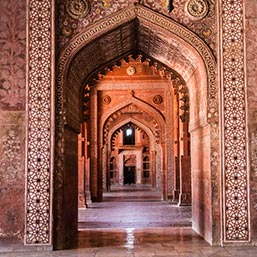 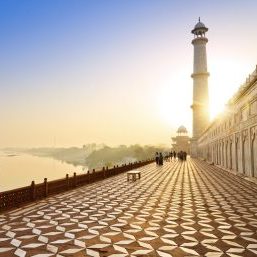 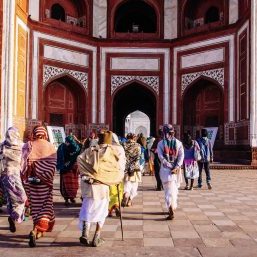 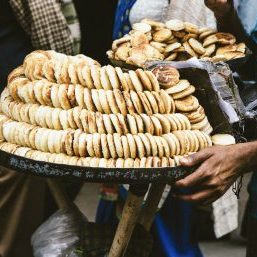 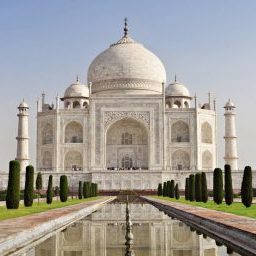 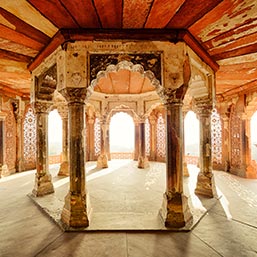 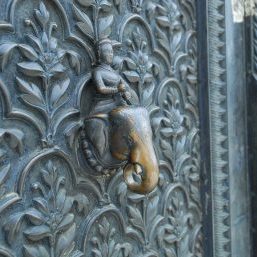 A little island of cleanliness and calm in the middle of the Taj Mahal mayhem. With this chain, you can be sure of excellent service, flawlessly clean rooms and a tickbox list of facilities. Lacking a little character, perhaps, but excellent value for money.

A view with a room: the whole orientation of the Oberoi Amarvilas is towards the Taj Mahal, which is visible from much of the lobby and bar area. Rooms are exquisitely appointed. Superb pool area is a sunken step well. Two brilliant restaurants.

If you only do three things in Agra…

Walk to the top of the Agra Fort and find the carved hanging window which provides the perfect view of the Taj Mahal and the Yamuna river.

Sit cross legged on the sandstone floor at Fatehpur Sikri in front of the Fort’s Diwan-i-Khas, the Emperor’s private audience hall, and imagine the scene 500 years ago.

So much to explore in Agra

Where to go in Agra

Mughal Emperor Shah Jahan once said the Taj Mahal made the sun and the moon shed tears from their eyes. So true; it is the embodiment of perfection.

Mughal Emperor Shah Jahan once said the Taj Mahal made the sun and the moon shed tears from their eyes. So true; it is the embodiment of perfection.